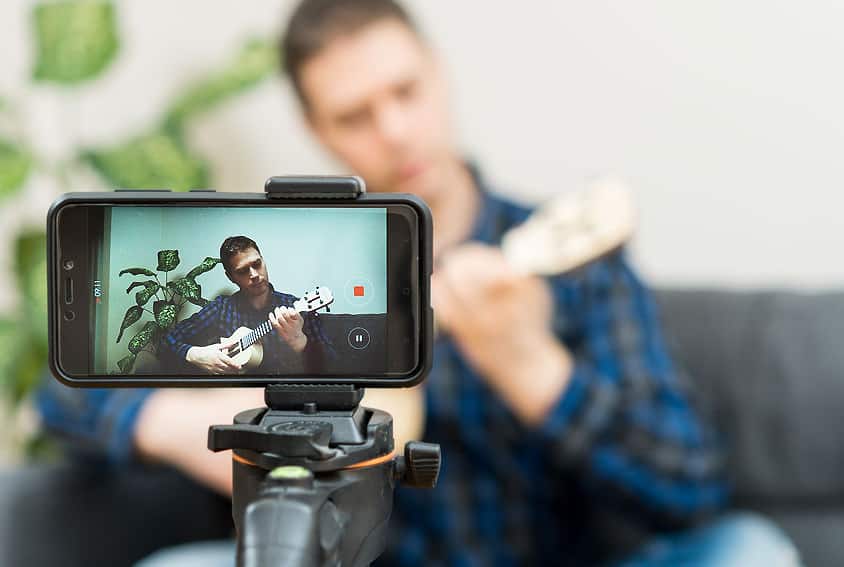 When performing music on video via a smartphone, is the sound distant and muddy? If so, it’s because the smartphone’s built-in microphone is too far from you/your band.

What’s needed are ways to get one or more mics closer to you (and if applicable, your fellow performers), and here I’ll describe several ways to do just that. Then you can record and/or stream videos with a professional sound: clear and close.

1) Connect One Closeup Mic To The Smartphone
This is the simplest method. I suggest trying a PopVoice lavalier mic with a 16-foot cable and a TRRS connector for this approach. Tape the mic to a mic stand about 1 foot from a soloist or 2 feet from a band. Plug the mic’s TRRS plug into the smartphone. Recent iPhones come with a TRRS-to-Lightning adapter, also called 3.5mm-to-Lightning adapter. Connect the TRRS plug to that Apple Lightning adapter.

Use a mic of your own choosing this way as well (Figure 1). Place the mic about 2 feet from a group or about 1 foot from a soloist and connect it to the smartphone using a female XLR-to-TRRS adapter.

These adapters are available, for example, here, here and here (one is shown in Figure 2).

If you want to build an adapter, see Figure 3. Tech note: The XLR-to-TRRS adapter should have an internal resistor of about 1000 ohms in series with pin 2. Or, it should have a 10 uF capacitor soldered to pin 2, and 1000 ohms between the non-pin side of that capacitor and pin 1. The phone sends a voltage through that resistor to recognize that an external mic or mixer has been detected.

Now that the overall sound is more present, balance the musicians by placing them closer or farther from the mic. Make some trial recordings to check the mix. If the vocals are too quiet relative to the instruments, raise the mic. During playback, be sure to unplug the adapter from the smartphone; otherwise you won’t hear the audio.

If using a USB mic, plug it into your laptop to record a performance with webcam recording software. The picture quality of most laptops is not great, so you might prefer to use a smartphone or a good webcam. Connections from a USB mic to a smartphone are described later.

2) Connect A Mixer To The Smartphone
With this method, close-mike all the instruments and vocals as you do on stage. The result is a pro-quality mono recording. Run the mics through the mixer, set up a mix, and send the mix to the smartphone using the devices shown in Figure 4.

The mixer has one or more of these output connectors: RCA (phono), 1/4-inch phone jack, and/or male XLR. A smartphone has a TRRS jack. To send a signal between those different connectors, you need three items which you can find in a Google search (see the illustration).

A simple cable to connect a mixer to a smartphone is the Headset Buddy line-level audio input adapter. The recording will be mono — if you want stereo, an audio interface and adapter cables are needed (to be explained later).

Once everything is plugged in, you’re ready to go. Set up the mix, then do a trial recording and listen to the playback to check the mix. Again, unplug devices from the smartphone to hear the audio. If you hear distortion, turn down the master fader on the mixer until the sound is clean.

Close-miked vocals will likely need some bass rolloff to prevent boominess, so turn down 100 Hz in the mixer’s EQ until the vocals sound natural. Some instruments might need that bass rolloff too. You could use Bartlett Audio mics on guitar, fiddle, mandolin, bass, banjo, and cello to get a natural sound without EQ — they provide good isolation and low leakage/bleed from other instruments.

3) Connect An Audio Interface To The Smartphone
This is the most sophisticated method, affording a way to record and stream video with pro quality stereo sound. Mike the band with several closeup microphones as you do on stage. Connect those mics to a mixer, then connect the mixer outputs to an audio interface. Set up a stereo mix. The audio from the interface will go into the smartphone, where you can record or stream a video in stereo. Figures 5 and 6 offer two ways to do it, showing the adapters and devices that are needed and how to connect them.

In Figure 5, audio from the mixer line outputs goes into an audio interface, which converts the analog audio to digital. That digital signal goes into the USB data port of an Apple Lightning to USB 3.0 camera adapter, which converts USB to Lightning to plug into an iPhone. That adapter is powered by a USB power adapter or battery pack.

In Figure 6, audio from the mixer goes into an audio interface, which converts the analog audio into digital. That digital signal goes into a powered USB data hub, which receives power from a USB power adapter, or from a power source supplied with the USB hub. From that hub, the USB data and power go to an Apple Lightning to USB adapter, or a Micro USB to USB adapter. The adapter plugs into the smartphone or iPhone.

After all the connections are made, plug the Lightning or micro USB connector into the smartphone. It should recognize the external audio source instead of its built-in mic. Note: for Android you need a USB OTG breakout cable (adapter). This converts the phone’s Micro-USB or USB-C port into a female USB-A port.

If using a USB mic or USB mixer, connect it to the powered USB hub or to a powered USB smartphone adapter. Place mics close to your band and enjoy a more present sound.

7 Steps to Secure Your Church Without Becoming Stressed or Overwhelmed

In recent years it cannot be denied that our American churches are seeing an increase of risk. Crimes such as embezzlement, assault, theft, and shootings are becoming commonplace in our once-sacred spaces. With so much to do in security to keep our open-door churches...

How to Protect your Place of Worship

By Bob Jensen Today’s headlines continue to bring shocking coverage of mass shootings from across the nation. On May 24th an attack at an elementary school in Uvalde, Texas left 20 children and 2 teachers dead and 17 more injured. This horrific event is just one of...

Once considered a safe haven, places of worship are increasingly becoming a target for domestic terrorism.  Fortunately, there are now firearms detection and emergency communications technologies available to keep worship communities out of harm's way. New...

In the previous installment of this series we discussed how to do a comprehensive vulnerability assessment to determine in which ways your church and its assets - from the building to data, finances, and staff - are at risk of attack. With this concluding chapter we...

5 Steps to Align your ChMS to Your Ministry Strategy

By Elliott Wood Have you ever driven a car whose wheels were not in alignment? It's as if you know where you're trying to go, but the car seems to be in disagreement. To go straight on the highway, you have to hold the steering wheel at a turn. After a while on the...